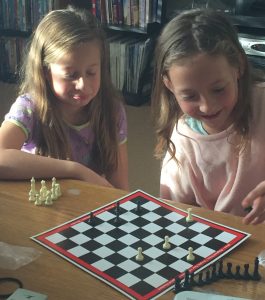 I learned a lot from watching grandchildren play checkers. Their game was an accurate depiction of life.

The first thing they did was to trade in the boring flat disks for the fun shapes of chess pieces. Why not choose pieces that make you happy?

There were no rules regarding what direction to travel in. Confidence allowed the pieces to move forward. Fear caused a retreat.

At times the entire focus was on one piece. This meant missed opportunities in other areas.

Does any of this ring true for you? It sure does for me! Played out before my eyes was an example of how behaviours learned in childhood are carried through into adult life.

They often pointed out their own weaknesses to the opposition. These would not have been noticed had attention not been drawn to them. I’ll admit I often do this as well.

The game was evenly matched for a long time. Then, one made a series of bad moves and was soon far behind. Discouragement set in and words like I’m not good at this game were spoken.

What happened next surprised me. The one in the lead sacrificed her certain win in order to make the other feel better. The unexpected winner received congratulations from the loser and the game ended with both players happy.

I looked on in awe and wondered if I would sacrifice a certain win in something in order to help another regain confidence.

These kids instinctively knew it’s not whether you win or lose, but how you play the game. This is a good reminder for me in the game of life.